AnimeCon.org’s mission to promote and support nerd fandom can not be accomplished without transparency. AnimeCon.org is organized and operated by Ryan Kopf.

I am Ryan Kopf, and in my efforts I have been attacked by unfounded smear campaigns and I am here to provide you with the truth.

There’s a weird phenomena spreading around the internet these days, the idea that you can do or say anything online without regard to the truth. That as long as what you’re saying is getting attention, it doesn’t matter if it’s the truth.

You can see these truths best exemplified in reading anything political online. Neither political party sacrifices children to the gods, but you would think they did if you believe everything said about them on the internet.

An offshoot of this type of contingent has found its way into nerd culture, and has begun to pervert the truth at anime conventions.

It all started with a good idea. “Cosplay is not consent.”

This idea meant that people in costumes should not be harassed or bothered simply because of the costume. This applied especially to women, as most female characters in all media (comic books, anime, video games, movies) wear relatively revealing outfits. Women cosplaying as these characters shouldn’t have to worry about being bothered, hit-on, etc, simply because they like a specific character enough to dress as them.

And that’s a great notion – people should be able to cosplay and wear costumes and have fun without worry of harassment.

And at a few conventions, we call them “party cons,” this was an issue.

However at most conventions with a responsible safety team, it was never an issue. Here in the Midwest at AnimeCon.org’s conventions, harassment in-person has never been a major problem.

Let me share with you an example. I was at another large convention where I witnessed a pair of men with tank-tops and sandals running around the hotel throwing glitter on people.

Glitter was everywhere. If you spent hours on your costume, would you want someone to throw glitter on it? Probably not, unless you’re cosplaying as David Bowie.

I reported it to the convention’s staff, and they promptly… did nothing.

And I watched these people continue to throw glitter everywhere for the next two hours.

At some conventions, the same response happens when harassment gets reported. They don’t investigate, they don’t do anything, and a couple of bad apples can get out of control. (We have a thorough investigative process at AnimeCon.org, following our harassment policy.

So some people came together and started to promote the slogan “Cosplay is not consent.”

And at first it worked, and it helped. Conventions that were lackluster in their security created policies and procedures to stop sexual harassment. When people were reported for harassment, conventions would promptly kick them out, and at first it was good.

And then people began to realize they could abuse this system. Ex-girlfriends and ex-boyfriends would regularly go to convention security and get their exes kicked out. It started getting worse and worse, as men and women might hit-on someone, get rejected, and then that person promptly reports the opposite of what actually happened to convention staff.

So, now we’ve got a bunch of nerds having fun together, and a small handful of people who want to abuse the system for their own gain.

Currently, we are at the crux of what to do about this situation.

At our conventions, starting at the very beginning, we took a great interest in creating an environment that was welcoming to all attendees. And to make that happen, it had to be free of harassment.

Every staff meeting starts with the same message: “You have two priorities: Customer Service and Keeping Everyone Safe.” Our staff, every one of them, is trained to escort any person who feels unsafe or is being harassed to our Convention Operations Department. (Children under 13 are generally not part of this process – as we expect them to be with adults and parents at all times.)

Once with our Operations & Safety staff, we get all the information we can about what happened. We talk to everyone involved. We try to get evidence, such as screenshots or messages. And then we figure out what to do based on the situation.

Sometimes that means making tough decisions, and kicking people out – either both parties or just one of them. We’ve on a couple of occasions found out that the person who originally made a report to us had a history of harassing people with false claims.

Every time these situations come up, we try our best to make the right decisions to keep our attendees happy and safe.

Our attendees are young.

Our average attendees age from 14 to 28 years old, and in today’s era this can be a critical time for young people. They are just discovering their interests, making lifelong friends, and beginning to socialize. This happens everywhere in the world, whether it’s conventions or not.

These are the ages when people just leave high school or college and have to figure out what they’re doing with their lives.

They are also the ages most people meet someone they love and even marry.

At age 21 people can start going to bars or house parties. Even if a parent raises perfect kids, they’re likely to be at a house party at least once, interacting with people in a way they never have before, drinking, socializing, playing beer pong. At our conventions, thankfully drinking isn’t such a big deal – but at some conventions or for some people, it is.

What these complex age groups mean is that everyone is exploring their own personal interests. Young women might for the first time wear short skirts and dress as Sailor Moon characters. Young men might show off their muscles dressed as “Swimming Anime” characters.

Those over 21 might also talk to each other, make new friends, and even flirt. Usually this is perfectly respectful, if not a little awkward, as nerdy conversation can always be.

In the cases that someone takes something too far, we figure out what happened and kick them out.

The issue is, harassment sometimes doesn’t stop there. If a man or woman rejects someone at a convention. Or says they don’t want to be bothered, it could escalate. Unfortunately today, it could be either party to escalate it.

Unfortunately conventions are more than just one-time events held in hotels or convention centers. They are a larger community. Before and after the convention, attendees join together in online discussions, Facebook groups, Twitter, etc, sharing memes, funny things, favorite episodes of anime, and more.

And sometimes harassment, lies, and slander make it onto these places.

A few people are literally crazy.

If you’re not familiar with it, there’s a website called Tumblr. It lets people post textual stories, images, and videos. It’s popular among young people ages 14-25, almost our exact demographic.

But a segment of this website (which originally existed on other websites and will surely someday move to a new website) is, sadly, dangerous. 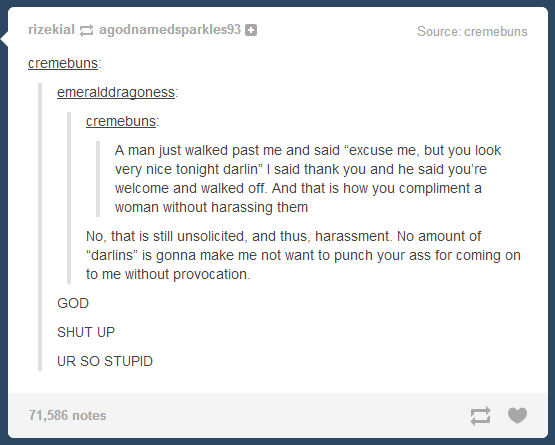 First, a female says that she wouldn’t mind at all if someone gives her a random compliment. And then, interjecting, is someone claiming that any sort of compliment or even acknowledgement of their existence is harassment.

And they will punch them!

See, at first people (the types who often attend conventions) started sharing positive, equality-focused posts. The idea of feminism, correctly defined as a desire for equality between men and women, took root there, and people shared their ideas to make a society where men and women were more equal.

But then it became corrupted.

“All men are evil,” started to become their sort of go-to idea. They took what was once a pro-equality movement and turned it into a hate group.

I hope you can agree that society can not function that way.

If the idea of a stranger saying “hello” or offering a compliment and then leaving you alone bothers you, that is a serious sign of anti-social personality disorder. If people don’t go places and say hello to each other sometimes, strangers will never meet, people will never speak, and we will become a cold, distant society.

Of course, you can meet people through introductions, by being introduced by another friend. But imagine a world where you have to assume everyone is afraid of you, and doesn’t want you to talk to them.

Honestly, I’ve found the opposite to be quite true most of the time. Make a funny comment. Mention the weather. Trip and fall down. All of these things will make the people around you smile.

These people make up stories.

Unfortunately these groups online have gone into overdrive to make up stories. They’ve done some awful things.

For example, a person made a website and several posts listing a bunch of people as rapists, pedophiles, and abusers.

Scary thing is though, nobody on that list had ever raped anybody.

They’ve posted fake or falsified testimonies and stories to try to back up their made-up claims.

And unfortunately today’s internet is fueled by drama, by people who have nothing better to do. People who don’t go outside and don’t have many real friends. And so these fake stories get shared and shared, by people who know no better.

Several convention goers, convention staff, and even convention runners have been accused in these false stories.

But that’s just it: They’re false.

Now, you may think “If that’s true, why aren’t they doing anything about it?” Well, actually, many people being harassed online have begun lawsuits. We have begun a couple of lawsuits as well. However, just one of our lawsuits takes at least $20,000 and nearly 12 months of work through the court systems. Often, many victims of these false stories don’t have the money to do anything about it.

Fortunately, despite all that I have written, conventions are often the safest place for nerdy people anywhere on earth. Bullying and harassment happen on an all-too-frequent basis in school. Public school teachers are rarely given the tools, nor the time, to adequately address bullying. “No tolerance” policies mean that if a student fights back against a bully, BOTH will get suspended, instead of just the bully.

That makes for a tough situation for anyone being bullied in schools, but at conventions our staff are not as far in age as our attendees, and we’re able to help them much better.

Attendees under 18 should not expect to experience sexual harassment. But there’s still bullying everywhere – perhaps one person calling another fat, or threatening to beat them up. We’ve seen it all online in all sorts of places. And we take these types of bullying just as seriously as we take sexual harassment.

In the end, what we are creating is safe spaces that are aware of harassment – instead of just blindly ignoring it or pretending it doesn’t happen.

But 99% of people don’t harass people, want to be social, and just want to express their own creativity.

Even if it makes us countless enemies, we will keep the 99% safe.